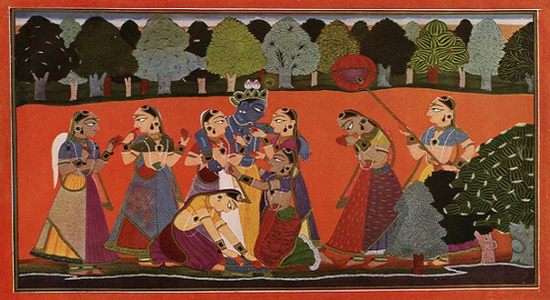 Basholi painting is a reputed school of miniature paintings known for its vivid, evocative colors, bold lines, and deep-set facial patterns. This style of painting saw its best years in the 17-18th century.  Basholi (Basoli) is a  town in Kathua district in the state of Jammu and Kashmir, India. It was founded by Raja Bhupat Pal in the 16th century. Basholi paintings are considered as the first school of Pahari paintings, many of which have evolved into the much more detailed and widespread style of Kangra painting school. The Basholi paintings had obscure beginnings, although Raja Bhupat Pal is widely credited as its founder.

The decline of the Mughal empire in the 17th Century saw a marked increase in the revival Basholi school of art. The Mughal emperor Aurangzeb paid more attention to war campaigns and stately affairs causing a decline in interest towards the fine arts.

As a result of lowered livelihood opportunities renowned, master craftsmen began to desert the royal court and began to seek the patronage of lesser-known Satrap chieftains who lead a comfortable life far away from the center of the Mughal empire. These local chieftains took the estranged artists under their wing. The Basholi school of painting is largely influenced by the Mughal School and in part by Rajasthan school of painting.  This school this school depicts both strands when we examine any piece of exquisite painting. The influence of Deccan and Gujarat are also conspicuous in these paintings. In the late 17th century, the influence of Basholi style became evident however it was lost out to the Guler painting tradition, which became dominant in the region. Dashavatara, attributed to the mid 18th century, executed by artist Mahesh was a significant work from this school. The illustration work based on the on the life of Krishna and the story of Usha and Aniruddha from the Bhagavata Purana were other notable works of art.

After the fall of the Mughal empire, the most popular family closely linked to the history of painting are the Padhas of Basholi. Padha Kunj Lal, a native physician of Basholi was presented with several invaluable Basohli paintings by the extant ruler. The Raja also had his portrait commissioned by the court artistes as a royal favor. The Padha house kept a close guard on the rich heritage gifts they ultimately raised in Basholi making it impossible for the  Afghans, Sikhs and the British to snatch it away from their private repositories. These paintings are reported to be exquisite and classical in pattern, design, color combination and themes. Connoisseurs of art from the world over flock to view these treasures and to express their appreciation for it.

The Basholi Paintings have peculiar characteristics, they have perfect geometrical patterns, bright colors and glossy enamel. Besides the bold colors, lustrous enamel like colors are also employed. The colors used are always brilliant with ochre yellow, brown, and green grounds predominatingThe figures in the paintings are shown clad in rich costumes, stylises faces and large bulging eyes lent unique individuality to these paintings. The popular themes of the Basohli paintings are the portraits of local rulers, the Hindu gods, figures from Hindu mythology, Radha-Krishna, Madhava-Malati love themes and themes from the Bhagavata Purana.

Basholi paintings - How are they made?

The canvas for a  Basholi painting requires hard-to-find Veale paper or an ivory sheet, special brushes made of squirrel hair, feathers of Kalmunha bird and colours laboriously derived from dried-up leaves, flowers, beetle wings and khadiya earth. For ornamental purposes, artists use 24-carat gold and pure silver. It is said that deftness and precision required to produce a miniature portrait is so high, that one can notice strands of hair on a subject’s head with the aid of a magnifying glass!