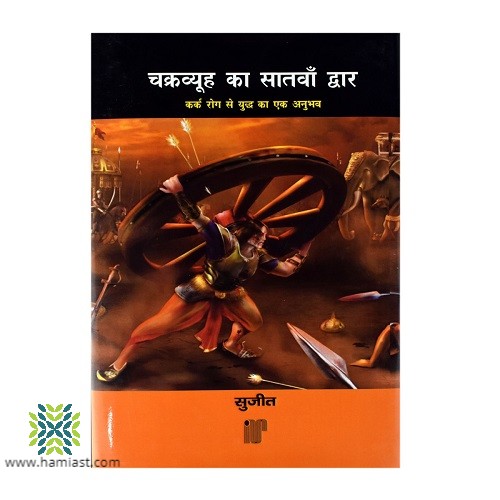 Chakravyuh Ka Satwaan Dwaar is a memoir written by Sujit Kumar Singh, an IPS officer of Jammu and Kashmir cadre, during his treatment of cancer at Medanta Gurugram. It depicts the story of a Police officer who is trying to fight with the disease like Abhimanyu of Mahabharata era at the seventh door of today’s real life. The book narrates the agony of personal struggle with this disease. The author is feeling trapped at the seventh door, where everything like health, money, service, family, reputation, dreams are at stake. He is gathering the courage to come out of it with flying colors, with the help of his friends and family.

Further this story of courage draws your attention towards the struggle of the author and shows how fighting this disease made him tougher. It is not always easy to win a battle of one’s own health in extreme situations like cancer but with the true support and best wishes of loved ones anything is possible. This book takes you through the ordeal of struggle, written directly from the bed of hospital on a daily basis during the treatment, the way the author responded to the treatment and how he could cope up with the side effects of one of the harshest modes of treatment of any disease. The story emphasizes on positive attitude towards life and a candid revelation of the author's strengths and weaknesses.

The story gives a ray of hope to the readers and shows the path of positivity during the lowest phase of life. It gives mental strength to fight with odds of life, it discovers the hidden fighter of a common man. It guides a common man on how to frame out a plan and keep patients during the fight with this deadly disease. The book is divided into seven chapters, each chapter showing different shades of life and struggle. Towards the end of the book, the author extends a word of gratefulness to everyone who was standing with him during the time of struggle. The author could feel the presence of God in everyone who blessed and extended his support to him. It shows the necessity of thankfulness in the human being.

Last but not least, it leaves you with belief and hope that faith and positivity can make anything possible in life.

Mr. Sujit Kumar Singh is an IPS officer of Jammu and Kashmir cadre, presently serving as DIG Udhampur Reasi Range. The officer belongs to a humble family of Patna, Bihar. He did his matriculation and intermediate from Patna Bihar. He was graduated from Hindu College Delhi University, with History (Hons.) in the year of 2002. Later he also did rural management from IGNOU in 2004. He joined the coveted Indian Police Service in 2007 and from then he is rendering his services to the nation till now.

He did his probation from district Baramulla located in the north Kashmir. Later he served as SP south Srinagar, Add. SP Budgam in the Kashmir division. SP Kargil in the Laddakh division and SP traffic and SP Reasi (Mata Vaishnav Devi) in the Jammu division. On central deputation, he has served as commandant 26 BN SSB, deployed in anti-Naxal operations in districts like Dumka, Khunti, Hazaribagh, and Ranchi in the state of Jharkhand. Also, he has served in the Special Protection Group (PM security) for a short period.

The officer has received many awards and appreciations from the department and public from time to time, this includes the internal security medal, ops Parakram medal and DG J&K medal for the distinguished service in J&K. In this book, the officer is sharing his experience of fighting cancer in the year 2018.