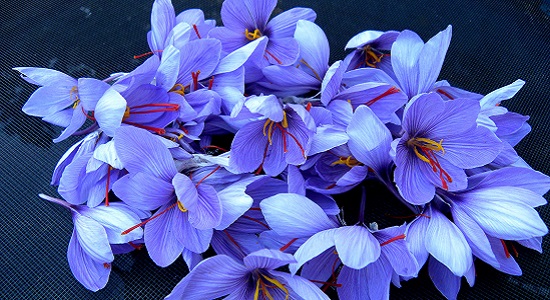 Saffron is the most expensive spice in the world and is derived from the stigma of the plant Crocus Sativus commonly known as "saffron crocus". The plant grows to 15 to 20 cm in height and bears lavender colored flowers. Only three strands or threads are obtained from a single flower of the saffron and are harvested during the early morning hours, thus involving a great deal of human labor making it one of the most popular and expensive herbs across the globe. A good saffron crop requires cold, dry climate with well-drained and rich fertile soil. It is believed that the saffron originated and was first cultivated in Greece, but today the king of spices is primarily grown in Iran, Spain, Greece, and India. In India, the golden herb is produced in Kashmir and Chenab Valley and are in high demand due to their premium quality.

Saffron has a very unique and rich taste, it is extremely subtle and fragrant. It has slightly sweet and luxurious taste, which is totally enigmatic. Its tricky and little bit difficult to describe the taste of saffron, but Kashmiri saffron or Kesar is instantly recognizable in a dish.

Saffron when dried consists of 65% carbohydrates, 6% fats, 11% Protein and 12% water. When we compare saffron with other spices shows richness in nutritional values across B vitamins and dietary minerals. Below is the summary of Saffron (Crocus sativus), Nutritional value per 100 g. (Source: USDA National Nutrient database)

Health Benefits of Saffron or Kesar

In recent studies, it has been found that the constituents in the  Saffron help in the promotion of healthy cardiovascular health. Heat shock proteins (Hsps) 27.60 and 70, in particular, were linked to metabolic syndrome and atherosclerosis significantly so the researchers wanted to the effect of saffron on antibody titers to HSP patients with metabolic syndrome. In a study published in the Journal of Complementary & Integrative Medicine, the levels of HSP's 27,60 and 65 were measured with 105 participants diagnosed with metabolic syndrome. The participants were randomly divided into two groups, one group was given 100 mg of placebo and the other group was given saffron. After 3 months of study, it was found that the saffron participants had a significant reduction of HSPs 27 and 70. (1)

Cancer is now considered to be the second leading cause of death in the world. Saffron has medicinal properties and is known for having anticancer properties.  In a clinical trial published in the Avicenna Journal of Phytomedicine, the effects of saffron on response to treatment in patients suffering from liver metastasis were examined. In total thirteen participants were included in the study. The participants were divided into two groups and bit the group received chemotherapy. Participants in group one were treated with the saffron capsule 50 mg twice daily along with chemotherapy and the other group received placebo. Out of 13 participants, six quit and seven continued till the end. In the group treated with saffron two participants showed partial and complete response 50%, whereas in placebo group no response was seen. This research suggests that saffron might be useful in patients suffering from liver metastasis and other cancers. (2)

In An Italian study, it has been stated that crocetin in saffron can enhance cerebral oxygenation which consequently helps in arthritis treatment (3) Saffron can also be effective in relieving gout, According to the University of Maryland Medical Center.

It has also been found that saffron helps to improve vision, according to the research report by The University of Sydney, it was found that saffron helped to improve the vision in the elderly. patients were given saffron pills and it was found that the patients had considerable improvement in vision. Saffron affects the genes that regulate the fatty acid content of the cell membrane which makes vision cells more resilient. The study also indicates that saffron’s potential in treating retinitisc pigmentosa, a genetic disease that causes permanent blindness in young people (4).

Depression is a very serious disorder of the modern times, and it has been found that around 21% of the population in some developed countries had depression. In Persian traditional medication, saffron was used to treat depression. Few types of research also suggest that saffron is effective in treating insomnia which is also related to depression. (5) . Numerous studies have also shown that saffron is also effective in treating learning and memory impairments. In a study patients with Alzheimer’s disease showed improvement when they were given 30 mg of saffron a day. Saffron also lowers the neurotoxic effects.

Few of the studies have shown that saffron was used in ancient times to cure Asthma. In Kashmir Kashmiri kahwa infused with saffron helps treating, asthma, cough, and cold.

Saffron has antioxidant properties and promotes digestion and also treats the digestive disorder.

The carotenoids present in Saffron can affect immunity in a positive way. According to a study, it found that sub-chronic use of 100 mg of saffron daily can have a temporary immunomodulatory activity without any harmful effects (5 ). Saffron has been found useful for pregnant women in many ways. Accorging to an Iranian study, saffron can increase cervix readiness during pregnancy. It also helps to bust mood swings, reduce blood pressure, aids digestion and curbs morning sickness. Saffron many benefits for skin, it offers radiant looking skin. It also helps to treat acne blemishes and blackheads. It also tomes the skin and improves skin texture.
Tags: