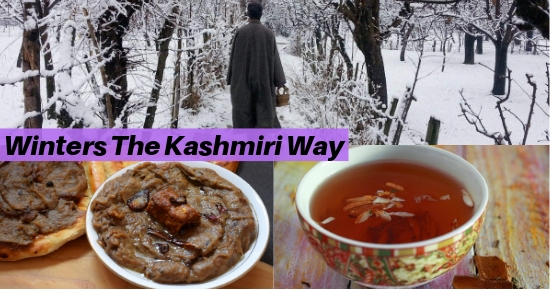 “If there is heaven on earth, it is here, it is here, it is here.”
As it is rightly said that Kashmir is the heaven on earth and the beauty of this heaven enhances in the winter season. In winters Kashmir turns into white-carpeted heaven. Kashmir is in a different zone from December to March, as the temperature decreases beauty of Kashmir increases. The snow-capped mountains with bare chinars, beautiful pine trees, and frozen lakes add to the Kashmir’s view and can make a person spellbound. The temperature in Kashmir can drop as low as -6 to -8 degrees. Kashmir has winters for 5 months but the coldest are forty days from December 21 to January 31 and are called Chila Kalan. There are different items which are specially designed to use in winters and to protect the body from the cold weather. The houses have Bukharis in them to keep them warm. Bukharis are also used in houseboats, some hotels, huts etc to provide warmth. People in the houses wear Pheran and kangris to keep themselves warm. The water in the pipes, taps, and lakes gets frozen. In winters, people in Kashmir enjoy winter sports like ice skating, skiing etc. There are a lot of changes in the food and lifestyle of people during winters to apt the climate changes and adjust to the winter weather and keep themselves warm.
The few famous and most used items of Kashmir are briefed as under-